Prepare for overwintering pests during the fall season

Fall is here! It’s a time when leaves change, we change our home décor and coffee shops add a little more spice to their menu. But, that’s not the only thing that changes. Believe us when Bullfrog tells you that invasive pests will come knocking at your door. In a process called overwintering, these pests change their behavior in order to survive during the winter months by finding lovely places to stay for winter (your home included). Sometimes, their predators follow. I, Bullfrog, know that I wouldn’t want any unwanted pests at my pad ruining my Frogmas dinner parties. So, here at Bullfrog Pest Control, we’ve set up a checklist and valuable tid-bits on how to prepare and what to do about overwintering pests.

Know the science of overwintering:

Many insects are well adapted for winter survival through physiological changes. Some reduce feedings so that their insides don’t freeze. Others maintain low-level activity or enter diapause, a type of dormancy. Some insects avoid freezing by producing an anti-freeze compound in their bodies. Aside from physiological changes, insects also go through behavioral changes during overwintering – they seek out dry, protected areas.

Most of these invaders are plant-eaters or reside on plants and foliage. For winter, they migrate indoors. These plant pests don’t generally bite, but may sting if provoked. These overwintering pests, usually stay indoors for the winter and go back outside in spring. Once inside, they are hard to find and control – some, entering homes in the thousands and hiding in difficult-to-access places.

Because overwintering pests are difficult to find and control, the best option is prevention. Pesticide treatment around the perimeter of your structure during early fall, before insects begin to overwinter, is key. Pest-proofing your home by sealing doors, screen and openings around your roofline are important to keeping pests out. Several areas of easy access also include vents, chimney flashing, worn doors, window screens, foundation cracks and utility or electrical lines.

Identify Common Overwintering Pests and where they nest: 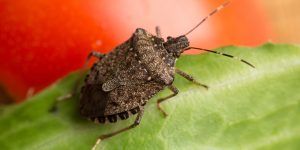 Brown marmorated stinkbugs, more commonly known as stink bugs, have a shield-shaped body. They release a distinct odor as a defense mechanism against predators. They mostly inhabit and thrive off fruit trees and field crops. They have mouthparts that allow them to ruin their host plants. Their size and large numbers make them hard to control once indoors. Stinkbugs are attracted to lights, so reducing lights outside and inside the home may help in prevention. They will also look for warm locations once they are inside. 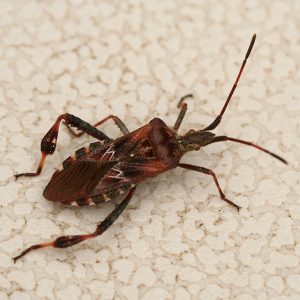 Western conifer seed bugs (WCSB) are brown with black and white edges. They mostly feed on conifer seeds and are destructive to the crop as well. They’ve been known to cause alarm when swarms of adult WCSB invade homes for overwintering. They’ve been seen mostly around doors and windows suggesting that those are important entry points. Prevention for this pest would be to concentrate on caulking and sealing doors and windows. 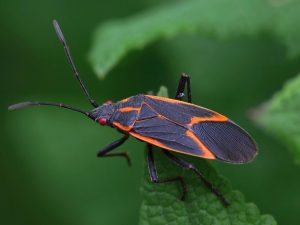 Boxelder bugs are black with red or orange markings. Boxelder bugs don’t bite but their mouth parts can leave a piercing similar to a mosquito bite. If crushed, the boxelder bugs may leave behind an orange stain from their fecal mater, that can discolor drapery and clothing. They gather into large masses to migrate into buildings. There, they hide in small cracks or crevices in walls to insulate. During spring they leave their overwintering sites and return to their host trees, female boxelder trees.

Elm leaf beetles are dull green-yellow with black edges. Both the adult and larvae of these beetles feed on the leaves of elm trees. To prevent invasion, seal all cracks outside the house. 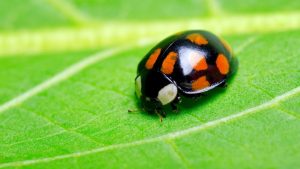 Multicolored asian lady beetle are a variety of colors and are spotted. They are not plant-eaters, but are predators to other plant-eating insects. They produce a foul odor when frightened or crushed and can also stain. Lady beetles are known to bite humans. They enter homes through any crack or crevice by the thousands and stay in the warm areas of the home. 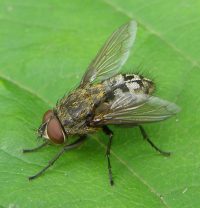 Cluster Flies: Cluster flies are a nuisance to many New York homeowners as they like to overwinter in cluster groups. They like to seek warmth during fall and winter months. They are not harmful to humans as they do not lay eggs on any food, but rather are parasitic to earthworms. If there are any warm days during their overwintering, they will try to exit the home by clustering on window sills.

Mice: If mice live outdoors they nest in a variety of sites. But, both house mice and deer mice will leave the outdoors and come into your home or structure if the conditions are right. Cold climate outdoors can cause mice to look for the warmer indoors during fall. Mice have been known to travel up to a mile in search for the right home. Mice enter structures the same way other pests do – through holes, doors, gaps, missing vent covers, etc. Once indoors, female mice will use soft indoor material to make a nest such as yarn, fabric, paper, insulation, etc. Indoor mice will feed on pet food or human food with the occasional insect. When moving indoors, deer mice may bring seeds and nuts with them for storage which may attract other pests. Some mice that live indoors, have been there for life and are a product of an infestiation. 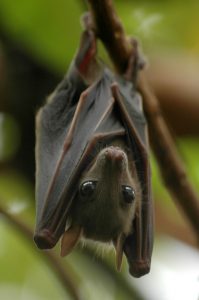 Bats: Bat-proofing should be done when young bats leave their indoor nests (usually an attic). This usually happens from July to mid-August. Bats are federally protected so several states restrict bat exclusion and management to fall and winter months when bats are no longer in roost beginning early August. Make sure to check your state’s allowed dates for bat proofing.

About the Author: Bullfrog